Creating a space that enhances connection with the outside world. Vol.2

Born in Tokyo, Japan in 1965. Since graduating from Waseda University Graduate School, Kira has been based in Amsterdam, Netherlands where she runs “moriko kira architect”, an architecture firm specializing in historical building repair and renovation.
http://www.morikokira.nl/

Adding Comfort of the Five Senses to Architecture 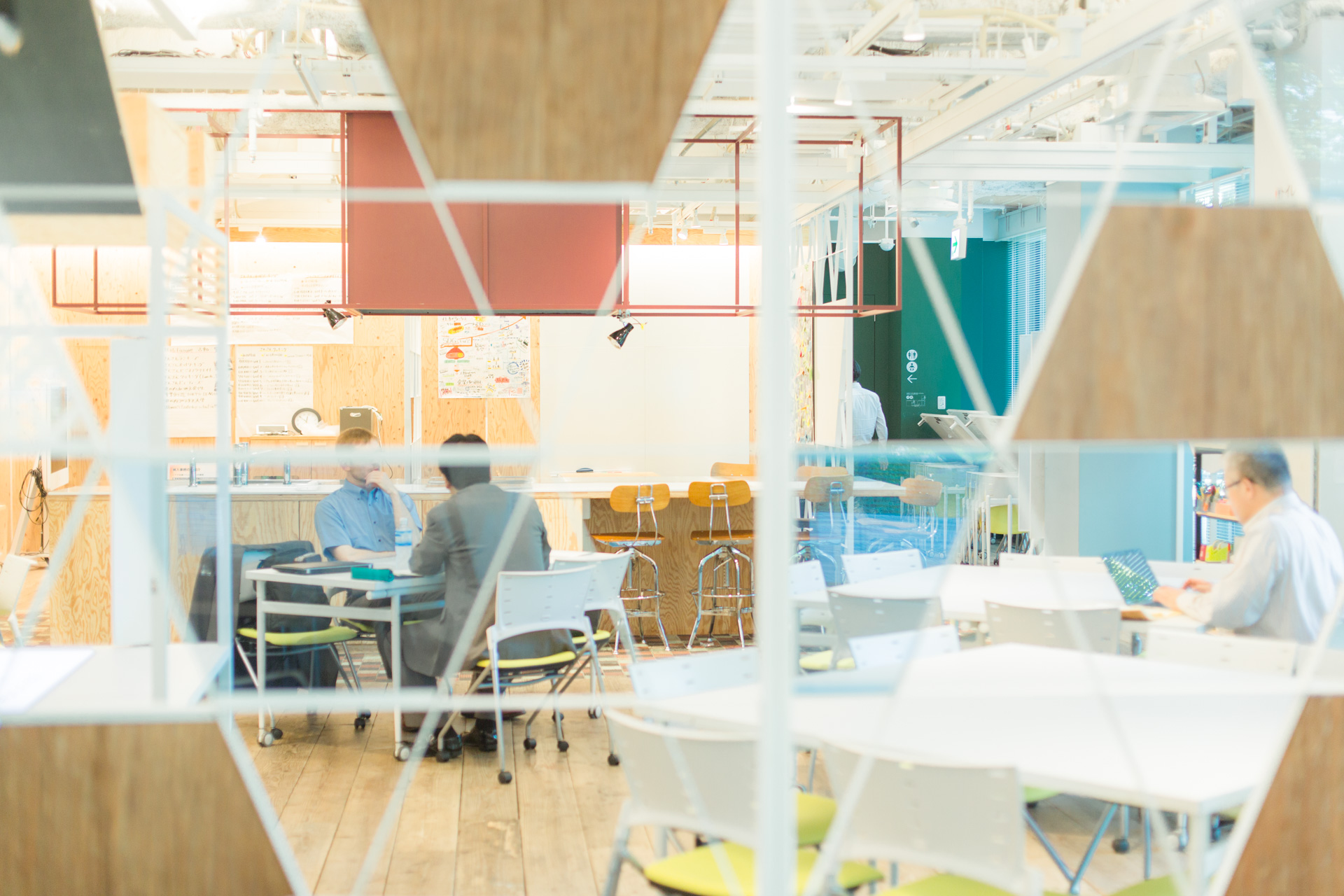 What is most important to you in your designs?

Connection. For example, one home may house a single family. First and foremost, it’s important to know the makeup of the family and how they hope to connect in their new house. Next, we consider how they view their connection with neighbors.

In the Netherlands, a number of families might come together and buy a large amount of land, for everyone to build houses on. Since everyone is building a house from the ground up, the families have the opportunity before they start developing, to consider the neighborhood they want to live in. By the time the houses are completed, a community has naturally formed.

The beauty of each house is important, but my hope is to create buildings that allow for natural connection among neighbors. 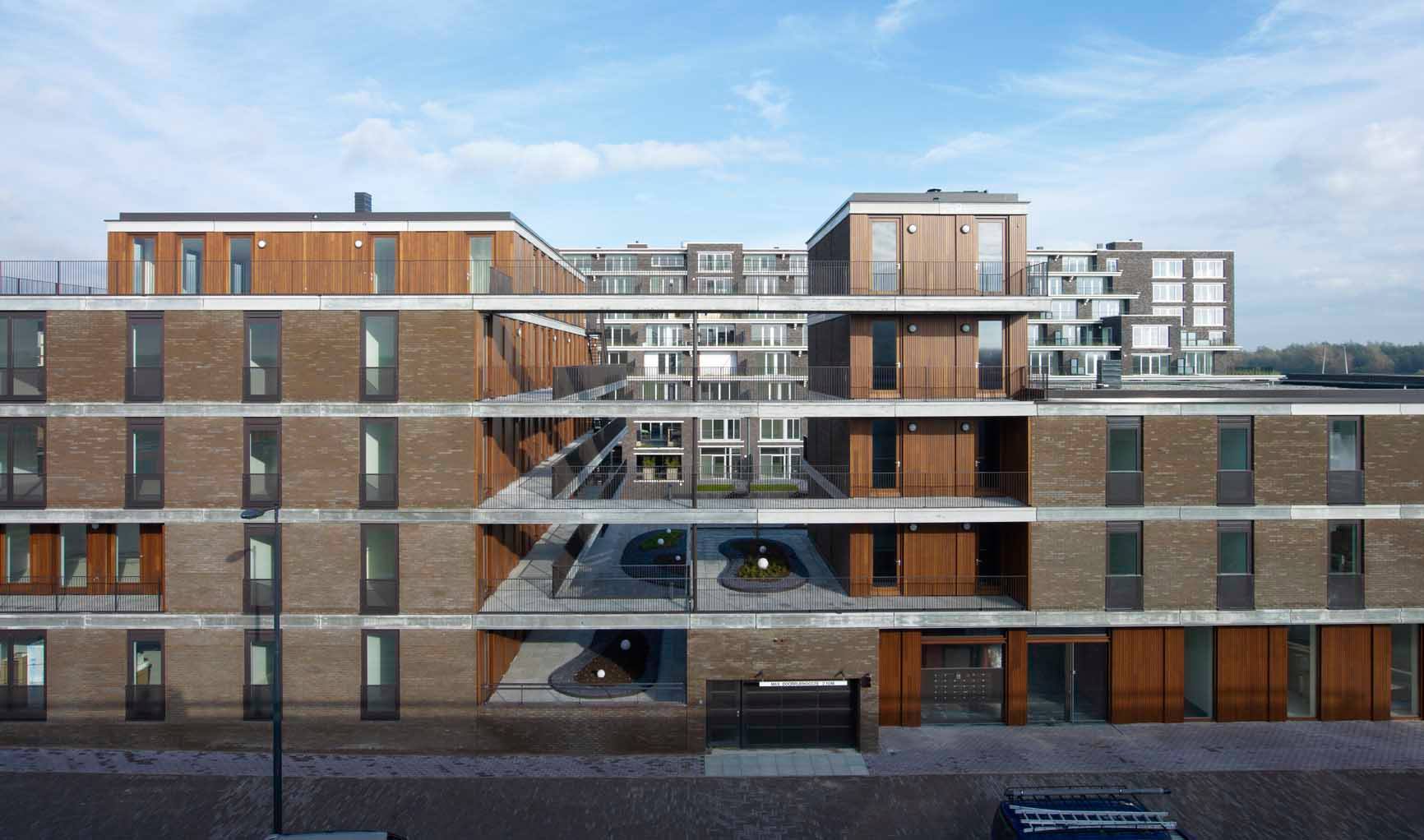 Apartment Building in IJburg
2010 Amsterdam (The Netherlands)
Kira: Several housing units are connected by belt-like concrete bridges, making the canals, lakes and townscapes visible from the spaces in-between. Each house enjoys a different view, as well as changes in winds and sunlight.

Do you receive a lot of specific requests from clients?

It’s case-by-case, but generally, if the client is interesting, the finished building will be interesting (laughs). It’s most difficult when people say, “Please make something interesting.”

For example, say there’s a limited piece of land that someone wants to maximize with specific activities in mind. Even if possibilities seem limited considering the numbers, we might be able to come up with answers that do away with contradictions. Sometimes 1+1=5, and sometimes the answer is a simple ‘1’.

The joy in doing creative work like this is that “contradictions” can be turned into a space’s “charm”.

Do you ever consider the five senses in your work?

Lately, I’ve been very aware of sounds and scents.

In Europe following the Lehman shock, there was an enormous shake-up similar to the dissolution of Japan’s bubble economy. It was a difficult time in our industry too, and people were downsizing their offices. Looking back on it now, I can see how that time gave us the opportunity to reboot.

Until then, my life had been about racing forward at full speed, but suddenly I was facing a challenging time and was contemplating my life and future. It was then that I realized a room with high sound insulation where the windows don’t open was bringing down my mood.

Our home in Amsterdam is on the top floor of a building, and the windows of my office do not open. There was something about that space that was bringing my mood down, but I couldn’t put my finger on it. That’s when I learned of “KooNe” and “Forest Note”, a service where you can listen to the live sounds of forests around Japan, in high-resolution.

There’s a time difference between the Netherlands and Japan, but in the summer I listen to the chirps of the Japanese nightingale in the Kochi mountains, and in the winter I hear the sounds of snowstorms in the Aomori mountains.

I’m not someone who can work with music, but when I surrounded myself with sounds from nature, I began to feel like I was immersed in nature myself. The pressure of a closed-in space eased, and I was able to work again. It was a fascinating experience. 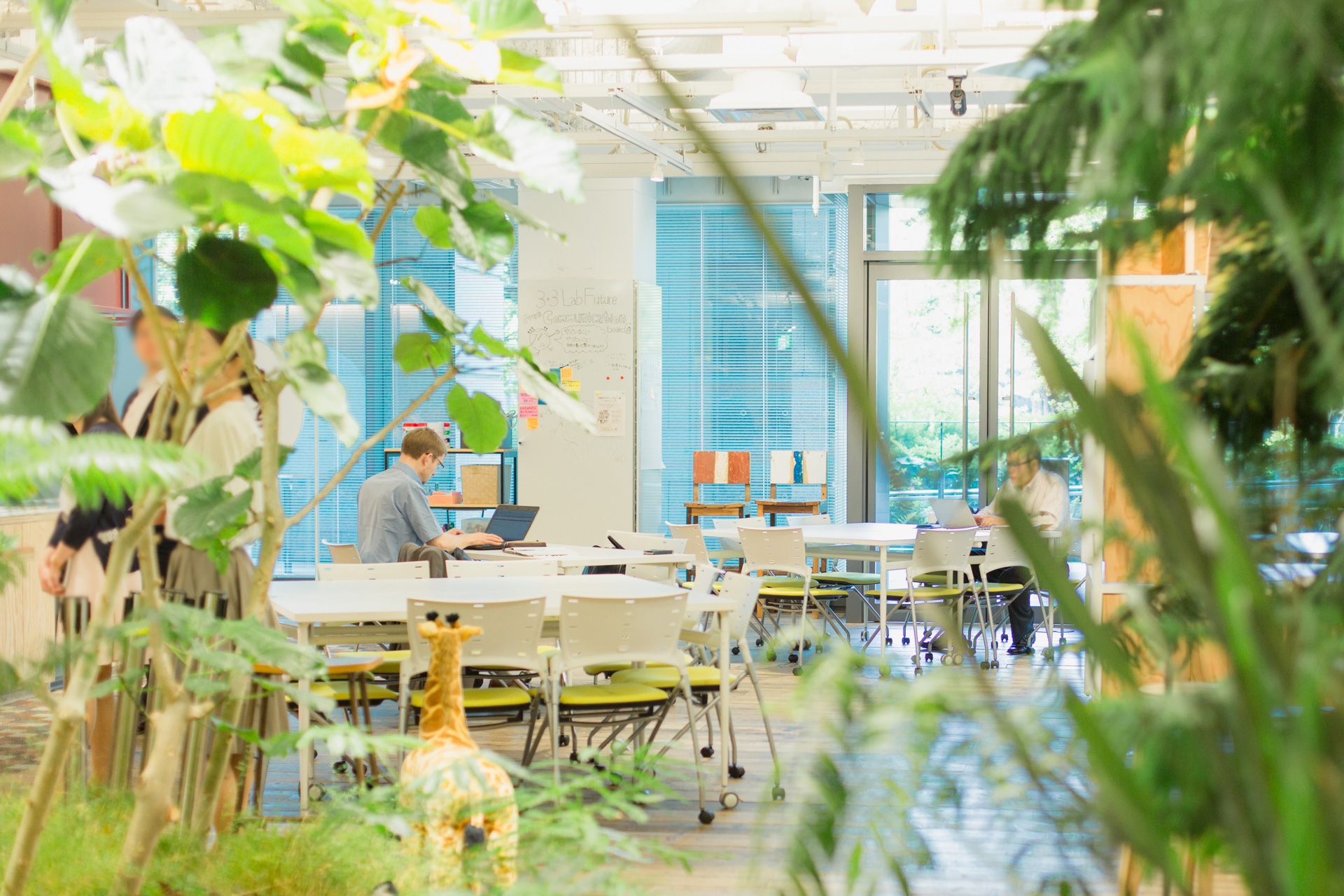 Here at 3×3 Lab Future, you can also hear sounds of birds chirping and the breeze in the woods. You start to feel like there’s no ceiling here, and can almost see the sun streaking in.

Do you have a similar experience with scents?

Yes, my experience with scents is similar to that of sounds. When I was feeling down and not in the best physical shape, a friend of mine who does phytotherapy introduced me to aromatherapy. I love to cook, so I used familiar spices like pepper and fennel in my meals, and had fun trying various scents. Citrus scents are really refreshing, aren’t they?

I learned firsthand just how much one’s mood can be altered with scents.

That’s when I realized that the world of architecture may be about “hard” elements such as the size and balance of an architectural space, say the size of windows, but “soft” elements I’d not given much thought to, like sounds and scents, actually have a tremendous impact.

Ideally, our surrounding environment in the city would be full of soothing sounds and scents, which we could bring indoors as well. That “connection” with the outdoors is very important.

But the reality in the city is that we’re not always surrounded by a pleasant environment, and we may need to rely on elements such as air conditioning. I now discuss components such as sounds and scents with my clients.

I look forward to incorporating sounds and scents more actively into my creation of spaces. 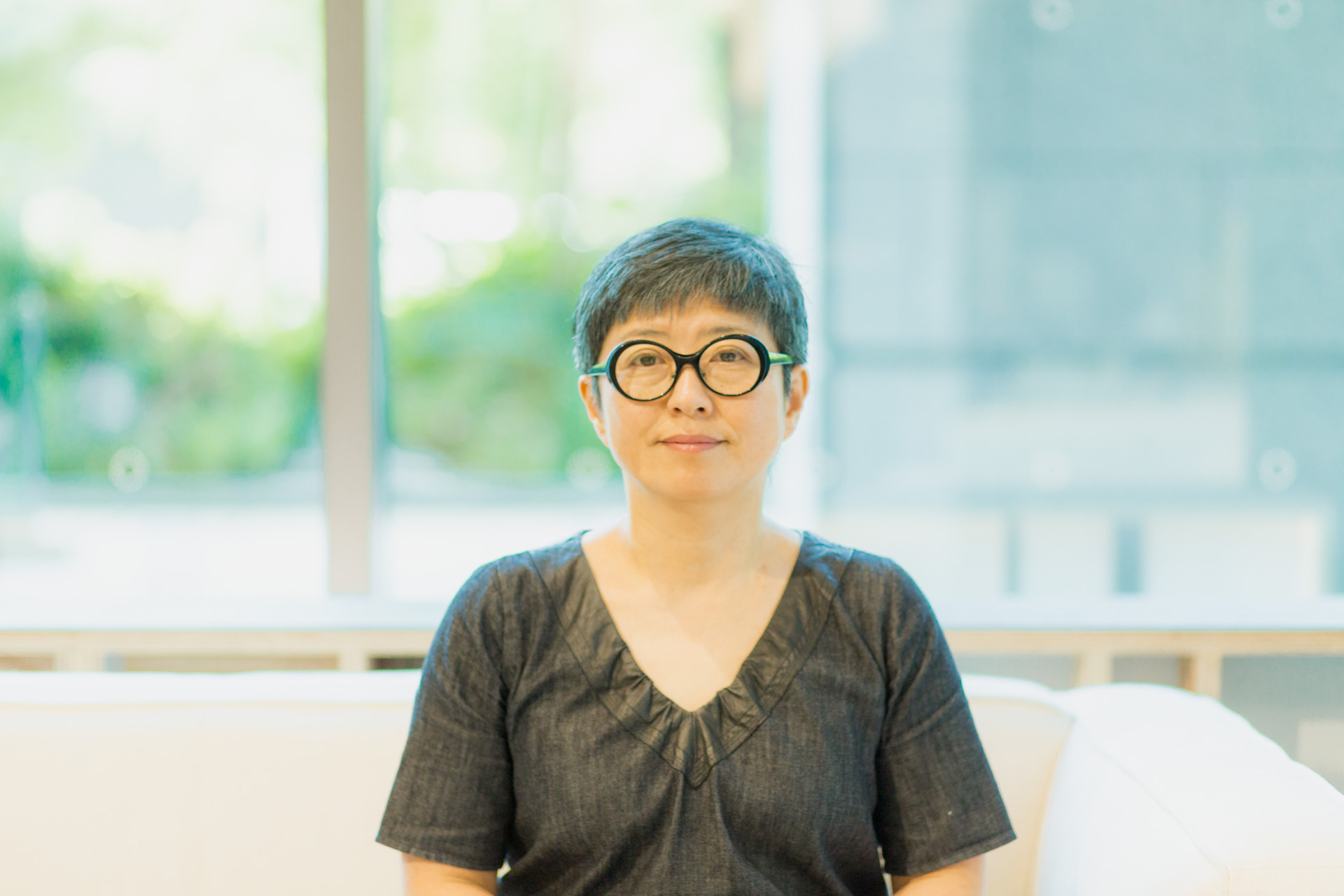 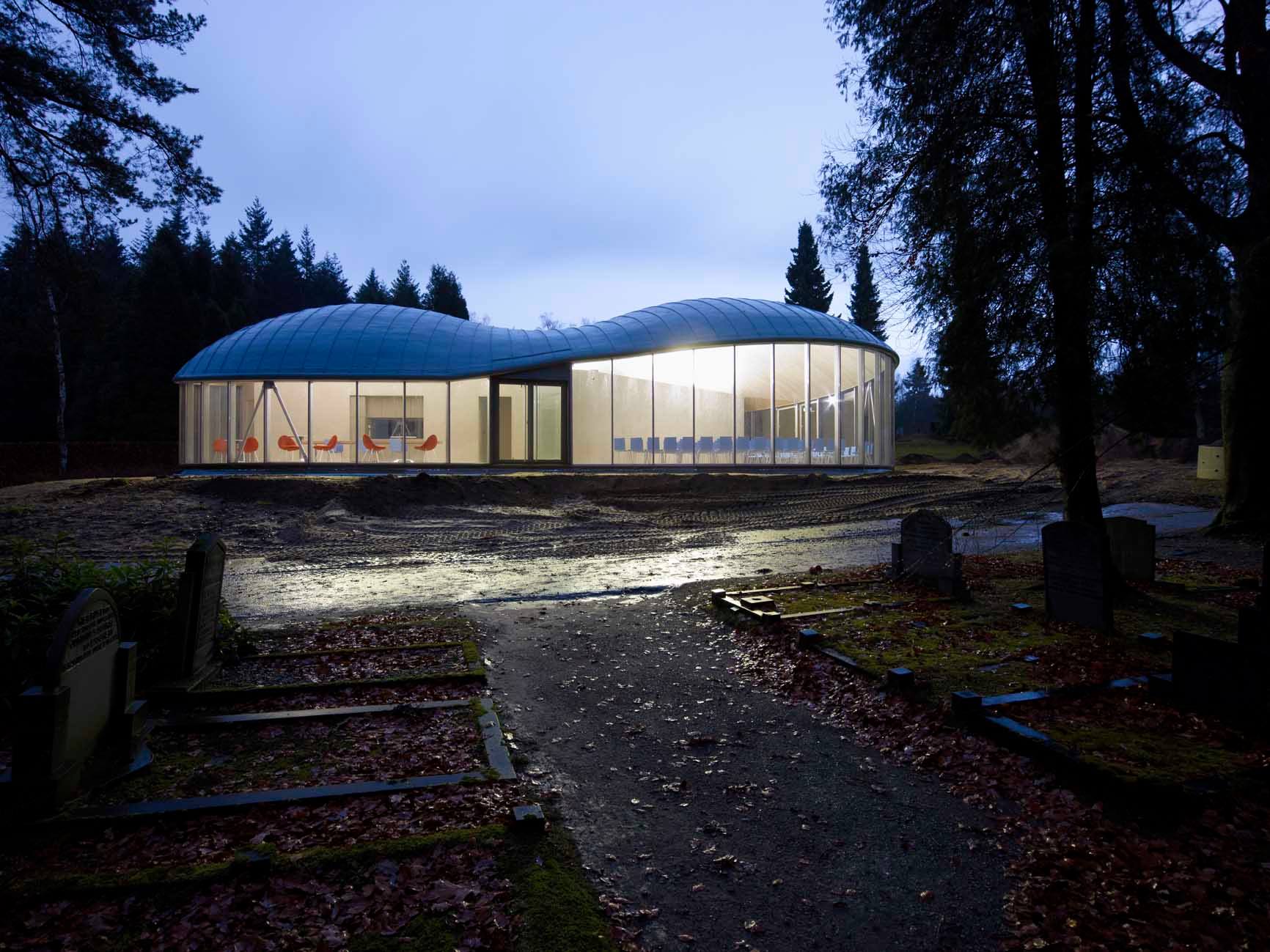 Pavillion Cemetery Heidehof
2008 Apeldoorn (The Netherlands)
Photographer: Jeroen Musch
Kira: This city-run cemetery is not only a place where people visit their loved ones, it’s also a popular destination for local hikers. Our hope was to create a space that was inviting for people who wanted to drop by for tea or coffee, and didn’t exclude by religion. Our inspiration was to create an embracing shape found in nature, something people are familiar with and can feel welcomed by.

Editor’s Note:
Moriko Kira is a renowned architect and the winner of several prominent awards in the Netherlands and Japan. We were inspired by her vision, which includes not just a single building, but the streets and city as a whole, as well as its history and future. She says, “Every person has his or her own character, and so does each place. I feel it’s an important part of any job to encourage the expression of that character.”

The interview was held at 3×3 Lab Future in Otemachi, Tokyo. With a soothing interior featuring domestic materials and furniture, lush greenery throughout the space, and the high-resolution sounds of birds and forests, we enjoyed what Kira calls “the connection to the outdoors” and the “comforting sounds of the forest” throughout our interview.

次の記事 ≫
Maximizing the Five Senses to Create Hit Songs A Mastering Expert’s Techniques and Instincts Vol.1
≪ 前の記事
Creating a space that enhances connection with the outside world. Vol.1