The Mastering “Space” and Communicating with the Five Senses 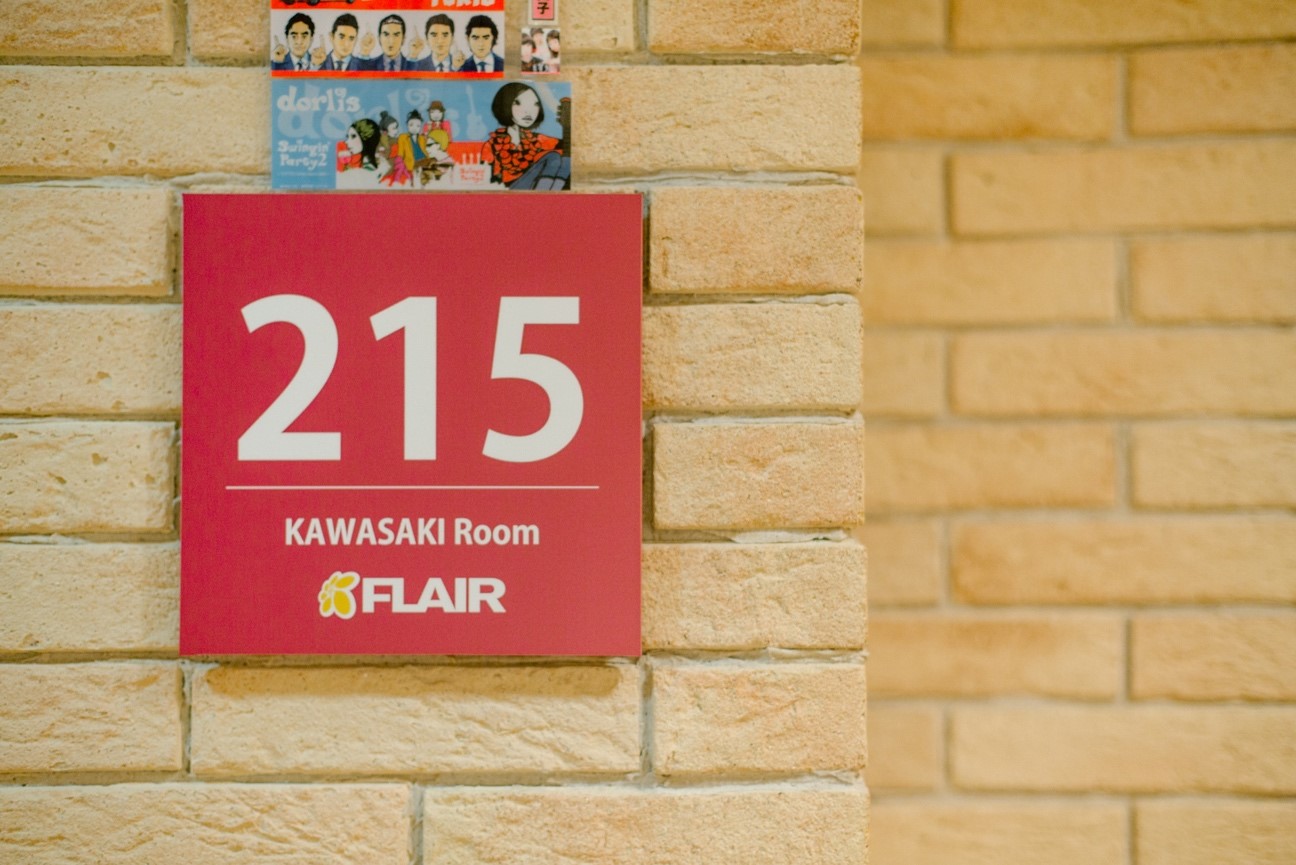 How do you determine what sounds “cool”?

I first rely on my own instincts and make my adjustments. Then, it’s about communicating with the artists and trying out their requests, keeping what works, and polishing the final product.

Say I’m working on a product with a singer. I’ll first approach the project with my ideas and sensibilities of what makes a good song. I have my own vector of what I believe sounds cool, and I play around that vector before making suggestions to artists.

If I receive a request for “more of this” or “more of that”, it may go against my own instincts but I make adjustments accordingly. And that often leads to, “No, that doesn’t work, let’s go back to the way it was.”

Two years into this work, I was working for the first time with a famous guitarist. The artist said to me, “Kawasaki-san, this song is titled “Scarecrow”. On a hot summer day, a farmer is hard at work on his farm. The sky is blue. His white gloves are hanging from his waist. That’s the kind of sound I want.” I couldn’t answer, “I don’t know what that sounds like,” so I tried to picture white gloves under a blue sky on a hot summer day…and when I said, “How’s this?” he said, “Yes, yes, that’s it.” (laughs)

Since then, I’ve made it a point to listen to the artists’ visions, and to try and communicate that vision through the music.

When making music, do you rely on your other senses too?

When I’m communicating with people about sounds, I rely on visual words, and also taste descriptions like “sweet” or “bitter”. There’s also the sense of touch in words like “hard” and “soft”, and with smell…there’s a difference, say, between the smell of cigarettes and that of cigars. So yes, I rely on all five senses to communicate music.

Everyone has a different way of expressing a feeling or sense that they have. So when communicating with artists, I end up relying a lot on the five senses. 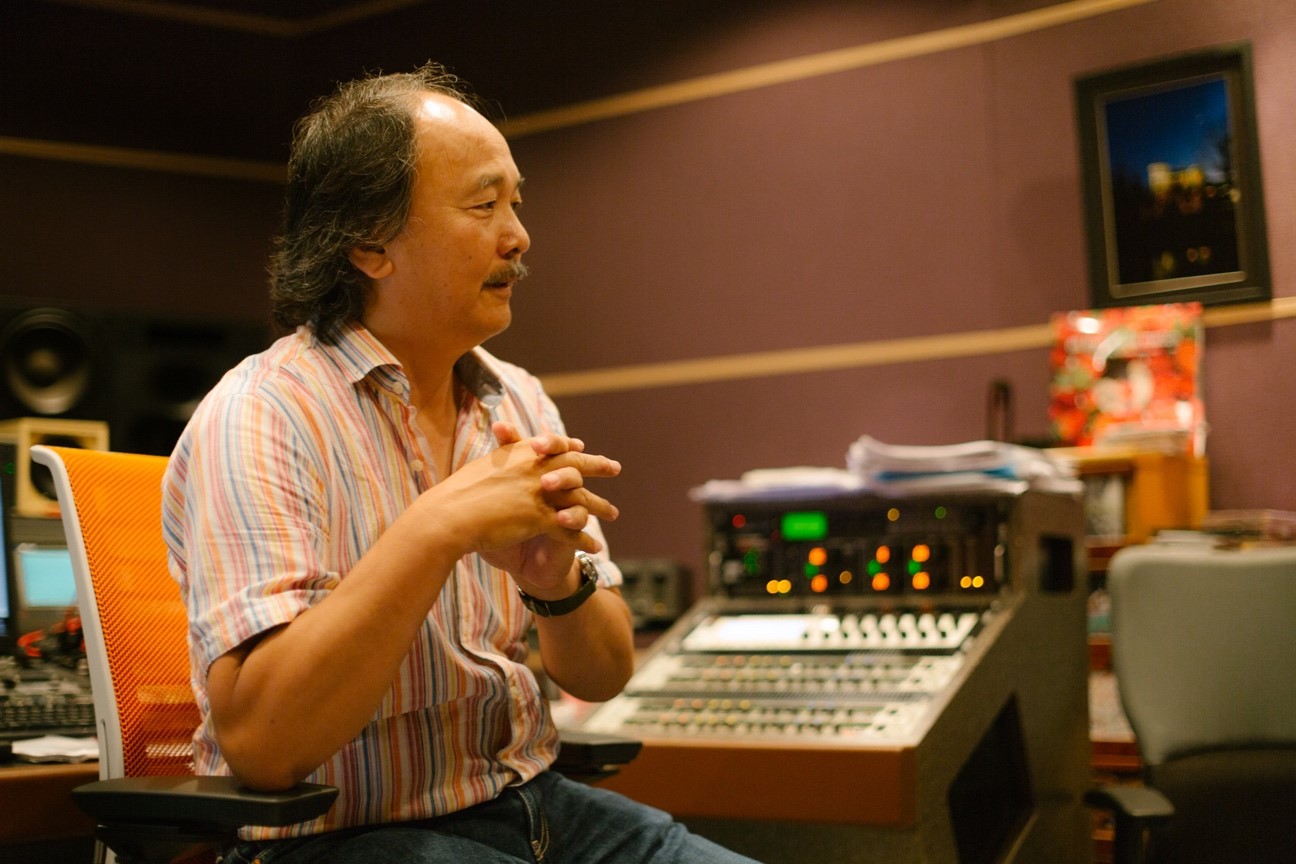 Does working in different genres influence your sound?

It’s all constant, whether I’m working in rock, enka (traditional Japanese song), or classical music. I’ll try to describe it visually. Let’s say I put two speakers, right and left, together to create a single frame. I’ll think instinctively, who is the main player here? In one case it might be, “I want to emphasize the vocals on this song”, or “This is rock that’s close to pop, so I’ll bring the voice up front”. I think of positioning like in a painting.

Think of it this way. Say you’re taking a photo with a camera, and both the subject and background are equally clear. If you want focus solely on the subject, you might make adjustments to blur the surroundings.

Do you ever think about the concepts of “time”, “space” and “people” in your mastering?

When working with artists, I like to keep a healthy distance. I don’t get too close. When you get too friendly with an artist, you become psychologically intertwined, which could prevent you from producing your own sound. And then you can’t do your work as a mastering engineer. But that’s when it comes to work. It’s different if we’re all going out for drinks. (laughs)

I try to keep an objective eye on the project, rather than try to see everything from the same perspective as the artist. 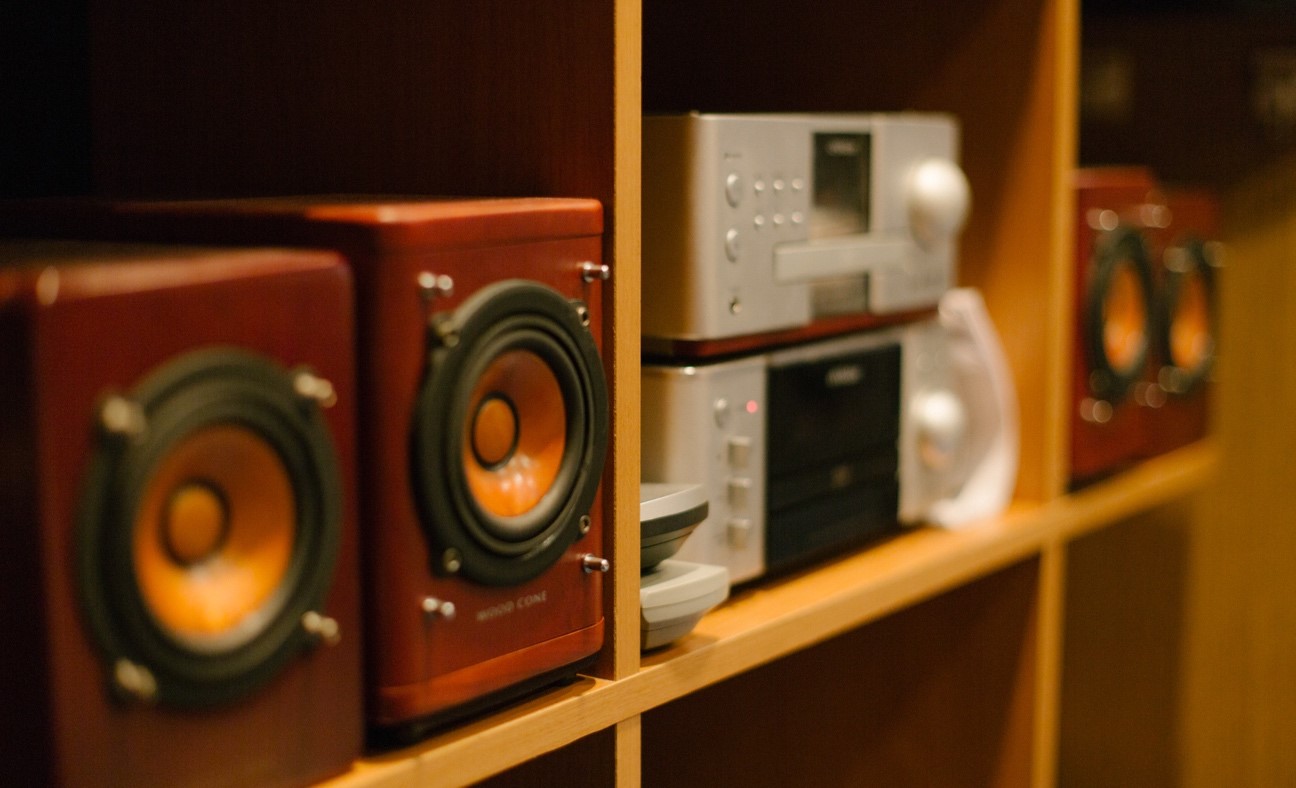 Any thoughts on the mastering “environment”?

The seven mastering rooms here have the same layout, but the audio equipment differs from room to room, depending on the engineer. Even with the same speakers, the acoustics are different.

When I listen to an audio file in the KAWASAKI room, I can push ‘play’ and know in an instant whether the sound is loud, small, muffled, or sharp, whether the vocal is loud or low. But when I listen to the same music in a different engineer’s room, my ability to make decisions suddenly starts to waver.

The rooms look the same, but the audio equipment is set up according to the engineers’ needs, so the sound reflection and absorption differs completely.

If I’m in this KAWASAKI Room, I can determine sound quality at 100%, but I’ll listen to the same sound in a different room, and my ability to discern sound might decrease to about 80%. “Environment” is incredibly important for sounds. If you’re not in a specific space, it’s nearly impossible to check audio files. I always decipher sounds and make decisions in this spot of this particular studio.

This room might appear to have soundproof material covering the walls evenly, but the acoustic absorption and reflection has all been adjusted in detail. If I believe a low sound will expand more with a reflection board, I’ll put a board there. If the sound expands too much, I might cut the board, and try it again. I determined all of that before asking the carpenter to finish the room.

With regards to “time”, it’s difficult to feel the transition of time here.

I don’t think too much about time when I’m working, but if the mastering process takes too long, the artist, staff, and even I lose our focus. So we make sure to take breaks when needed.

People think we’re always working through the night, but mastering is actually a relatively quick process. Depending on the album, we schedule two or three days ahead of time.

Say it takes a half hour to finish one song, that’s five hours to do ten songs.
From the moment I press ‘play’, it takes about ten minutes for me to determine the adjustments I need to make. The artist and I communicate for about ten minutes, and then I make the necessary changes, which is another ten minutes. If it’s about five hours, we tend to work straight through.

Someone will ask me, “Do you want to eat?” to which I answer, “I’ll eat when I get home”. People in the same room might be disappointed to hear that. (laughs) 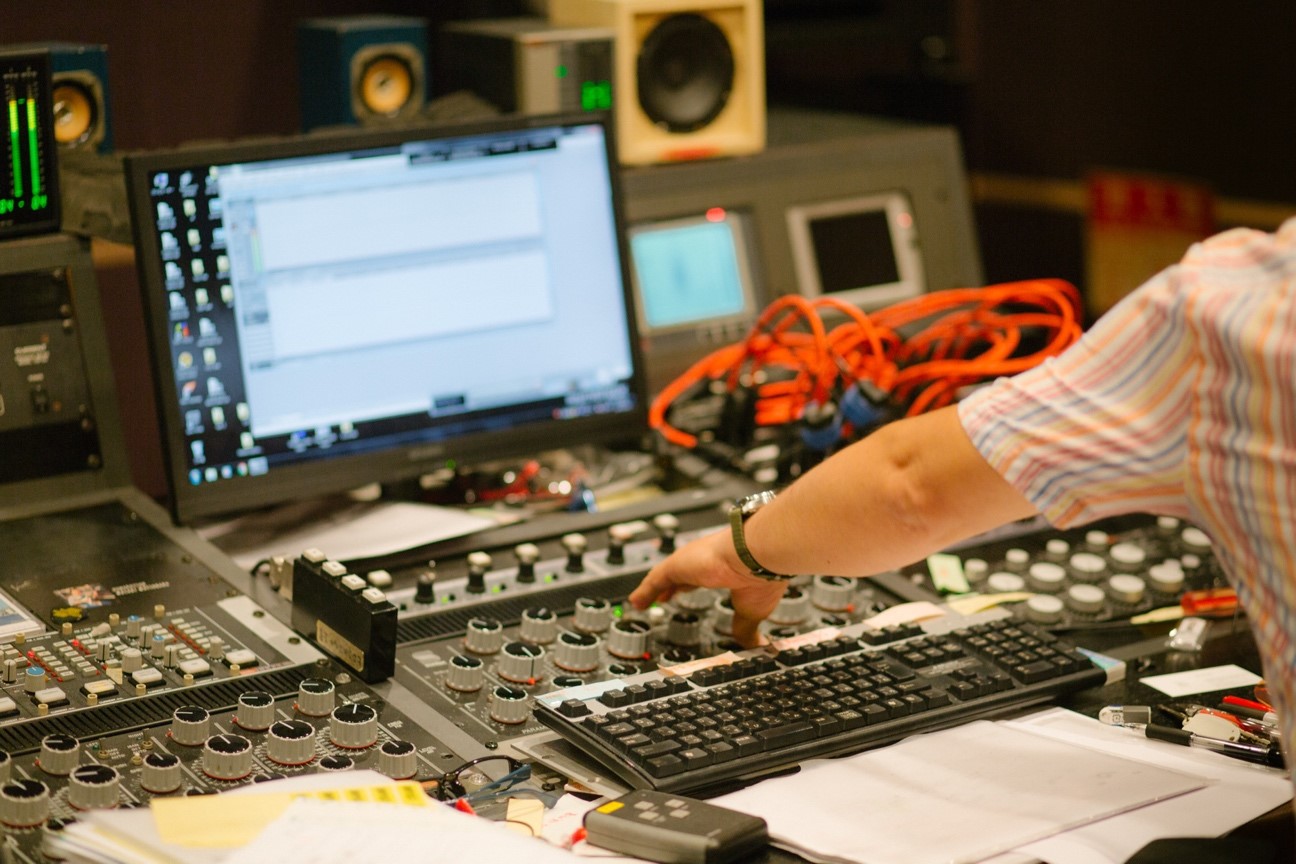 What do you do to sharpen and maintain your sensibilities?

Play. How much play I can incorporate is key. I’ll wake up early in the morning, before anyone else, go out and play, and come home when I’ve had my fill.

“Play” can be anything. It can be going out to take photographs. If it’s hydrangea season, I’ll go to Hasedera Temple in Kamakura early in the morning. I think it opens at 8am. So I’ll go in at 8am and be out by about 9am. After that, it gets too crowded. I’m very serious about my play.

It’s a different kind of play from relaxing or hanging out. It’s strenuous, but fun. I like to frequent the same place repeatedly with the hope I’ll encounter an amazing moment. If I’m seeing fireworks in Odaiba, I think of which side I want to shoot from – the Statue of Liberty side or the Harumi side. The fireworks take on a different expression depending on where you stand.

Sometimes I’ll take what I’ve absorbed and use it for my work, and other times it helps in communicating with artists, to chat about places we’ve gone recently. That kind of talk helps to ease any tension in the room.

Visual experiences have a great influence on my work, and so too does taste, in terms of sweet and bitter, and touch, like hard and soft. I’d say the five senses are essential. 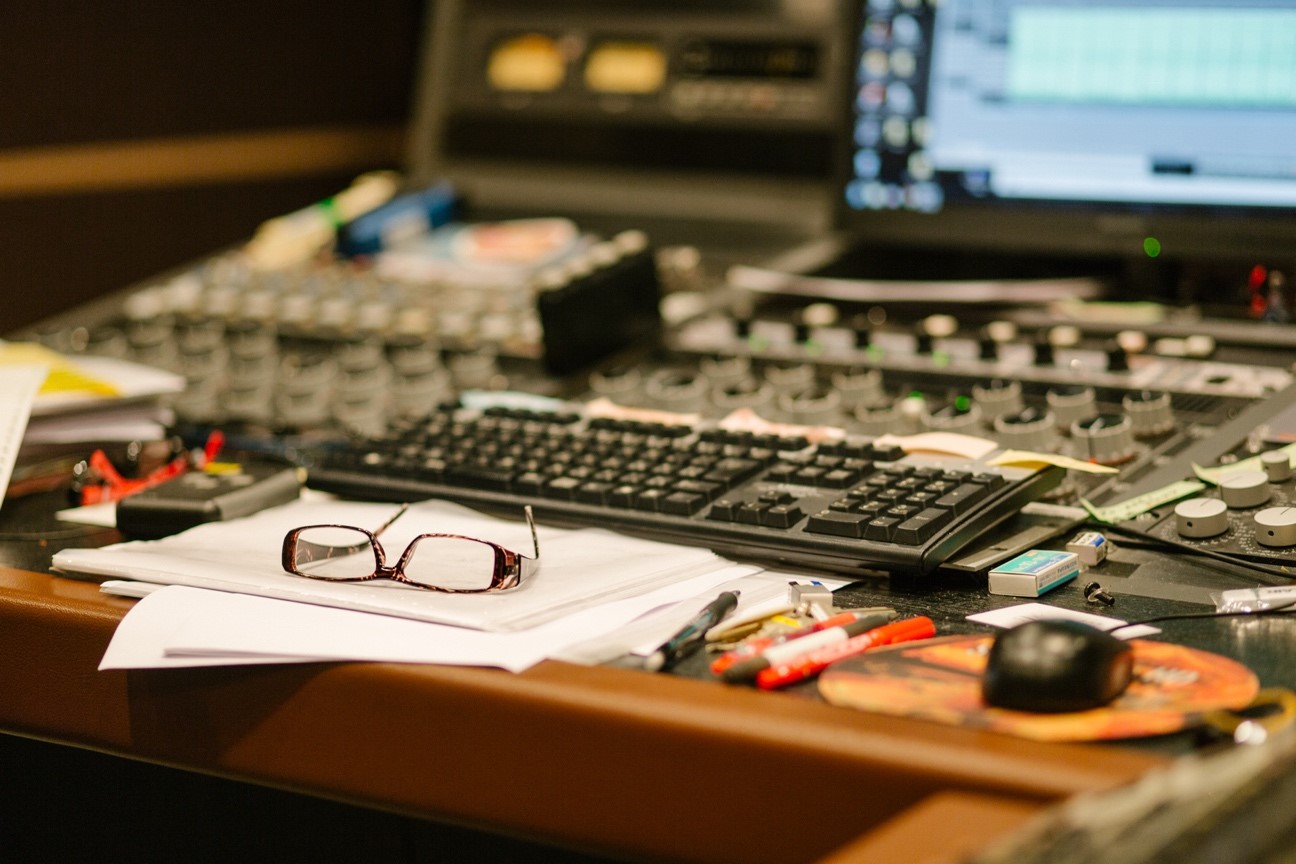 The “mastering room” in a studio is completely soundproof. Mastering is a process shared by a limited number of people including the artist and director, and at the center of it all lies Kawasaki’s instincts about what makes a “hit song”. Victor Entertainment places great value on its people, saying “people make music”, and this interview brought that point to the forefront. An expert like Kawasaki is trusted by artists for his deep understanding of their sensibilities, while also staying true to his own senses, which are enhanced and enriched by serious play.