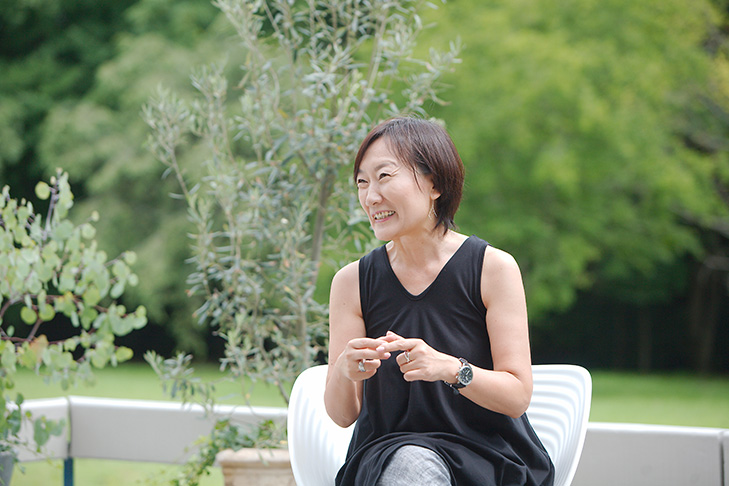 Born in Sendai. Producer and Director. Yoshikawa produces and directs diverse cultural art experiences bringing industries together including tourism, town planning, education, and medical care. Yoshikawa has produced community programs at Ezuko Hall in Ogawara of Miyagi Prefecture, as well as taken on the role of Culture Creation Director at Hachinohe Portal Museum “hacchi” in Hachinohe of Aomori Prefecture. She has acted as Tourism Adviser for regions including Minamisanriku, Miyagi, where she launched the “Kiriko Project” in 2010 and children’s song-writing workshop in 2012. The “Kiriko Project” received the 2013 Tiffany Foundation Award for the Preservation of Japanese Traditional Arts and Culture in Contemporary Society. She is founder and head of DAHA Planning Work Inc., and heads the non-profit art initiative ENVISI.

Connecting Cultures through the Five Senses

Your work considers the world from the residents’ point-of-view.

I think that comes from an early experience I had.
I had received an offer to produce a concert for the opening of a new 5000-seat outdoor theater in Morita (currently Tsugaruno), Aomori, in a village of about 5,000 people. I thought to do an event with 1,500 participating villagers holding torches. So I stayed in one of the local residents’ homes, and together with the villagers prepared 5,000 torches. I’d worked with artists before, but that was when I realized how wonderful it was to have “ordinary” participants working intently on a project. The event provided a powerful experience for both the artists and local villagers.

There is beauty in everyday life, there is so much that stirs the soul. It’s the artists who make those dramas visual, who refine them, but it is the ordinary lives that inspire these artists.

Before we take the brilliant performances of artists and drop them into the crowd, it’s important to learn what kind of lives the people of the region are living. That knowledge helps the artists too…and that’s the kind of pairing I enjoy coordinating. 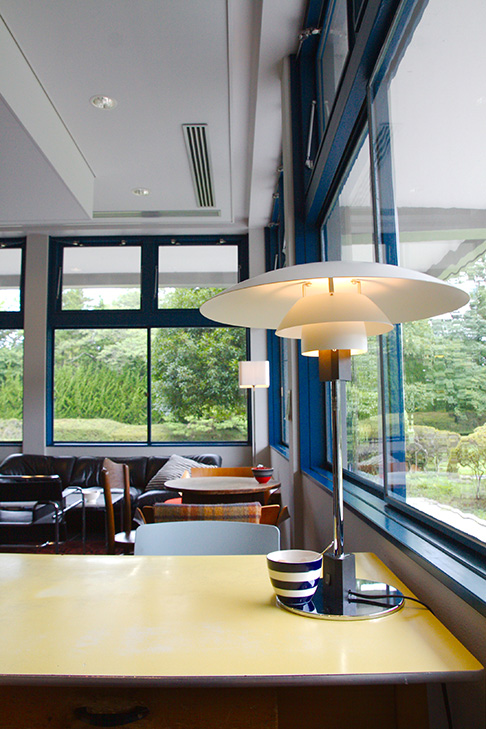 What are your thoughts on the potential of regional revitalization?

Our society focuses so much energy on cash flow, but behind the various tourist businesses that are able to create any kind of cash flow, is cultural capital.

In Hachinohe, Aomori, formerly of the Nanbu Domain Area, culture has been cultivated around the knowledge necessary for survival in a tough natural environment. It’s a beautiful thing. The people are warm, patient, and good on their promises. I feel they were actually fortunate to have been “left behind” in the quickly rising economy, as that’s how they were able to preserve tradition and culture.

In our modern world, it’s an enormously powerful asset to be part of a culture that has survived the ages. I believe “culture” exists where people find beauty in the daily wisdom of the olden days and can appreciate it in contemporary times.

I’m also very involved in Minamisanriku. The town lost everything in the earthquake and tsunami of 2011. There is little evidence left of the rich culture and lifestyle it used to possess. All that is left are the memories, skills and talents of the townspeople. To be able to pass on the region’s culture to the next generation depends solely on the activities we’re partaking in now. That’s something I feel deeply, everyday.

A year before the earthquake and tsunami, we happened to have launched the “Kiriko Project”. Kiriko are paper cut-out decorations produced by Shinto priests to display on shrines altars around the Tohoku every New Years. The intention of the project was to document family memories, histories, treasures, and daily lives using this specialized handcrafted art.

Women in their late 20s and early 30s participated in our reporting. They weren’t used to having their stories told, but through this activity of cutting and decorating paper, they allowed us into their homes for a peek of their lives. We captured their stories in photographs, and the “Kiriko Project” still continues today.

The townspeople were trying to get back on their feet after the devastation and I’m sure they thought, “We’ve got no time for this.” But I believe documenting the lives of the residents using a method that is unique to the region, will in turn create a new culture in itself, which will then become a truly valuable asset to the community. And that will eventually lead to an economic revival. 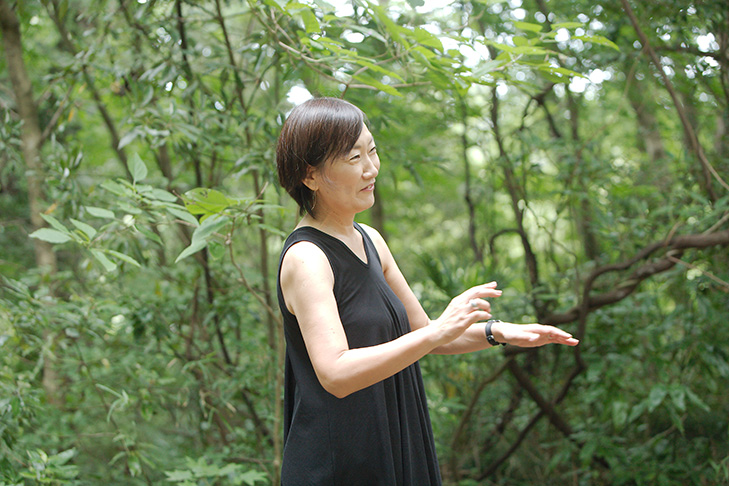 What are your thoughts on the five senses?

Let’s take music, for example. You might think you’re just using the sense of hearing. But an artistic experience involves all five senses. When I produce an event, I ask myself whether I am creating a complete experience for all of the human senses.

In Hachinohe, we’re preparing a new project for the “Olympic Year”. Hachinohe is a city with a population of 230,000. Every year, there is a large festival called the Hachinohe Sansha Taisai Festival. The climax of the festival is a parade of 27 floats, each produced by regions in the city and often led by the local fire department.

The magnificent floats are made of Styrofoam and often require forklifts in the production process. Old folktales such as Yamata no Orochi (Eight-Branched Giant Snake) and Funa Benkei (a famous Japanese noh tale) are incorporated into the floats. What’s amazing is that it’s the townspeople creating these grand works. The festival is not famous like Aomori’s Nebuta Festival, and there are no specialists like the Nebuta craftsmen. Ordinary people come home from work, gather in their sheds, and work on these floats.

This summer, I followed the making of the floats, taking in the aromas of the outdoor cooked meals, the singing of kids and unified hollering of adults, the searing hot sun. The festival with the 300-year history has been ingrained into all five senses of the people who were born and raised here. From the time they’re newborns, the children experience these festivals using all five senses. They’ll probably be celebrating in the same spot when they’re forty.

When your five senses are awakened, you experience a deep sense of life.
Adrenaline is released throughout the body and the five senses come alive. To experience this on such a grand scale once a year changes the way one lives his or her life. I believe towns that take their annual festivals seriously are those that put their townspeople first. To keep a festival going year after year is a difficult feat when you think in economic terms. But spending time with others is a joy, and it adds abundance to your life. To be able to share in experiences that enliven the five senses is tremendously fortunate.

The memories embedded into the five senses are cultural capital for the townspeople. At the same time, what is felt by the five senses is difficult to put into words. They’re delicate and fragile, which I believe makes them all the more precious.

Editor’s Note – Through this conversation, we pictured the rich history of 300 years and all of the lives associated with it. We imagined the drama of one person’s life, and the depth and beauty that can only be recalled by the five senses. The scars left from the Great Tohoku Earthquake present us with a daily reminder of what is important in our daily lives. Yoshikawa’s regional projects use art to touch the five senses and increase the capacity of each person to reach his or her full potential. This then elevates the energy of the region as a whole. That she possesses the viewpoints of a woman only seems to add a layer of hope to the future of these projects. 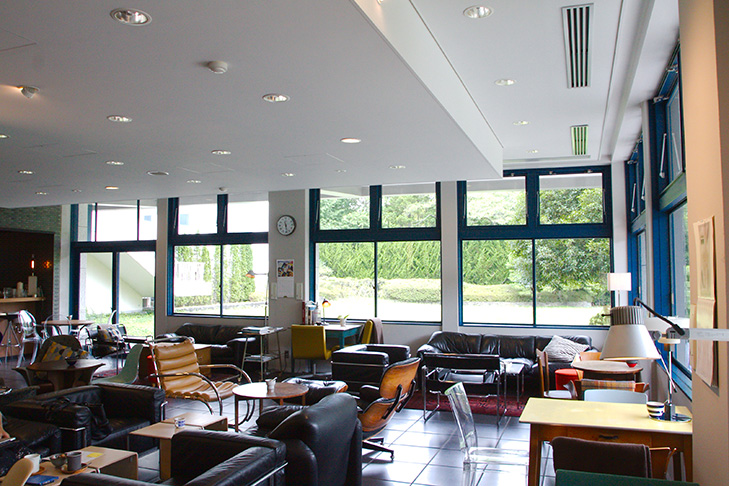 In today’s modernized world, our lives are increasingly led by technology and less by the five senses. This only results in the dulling of our senses. Perhaps it is time we take stock in the dangers of such a dulling, and go back to awakening the senses.